Home / What to do / Antimony mines 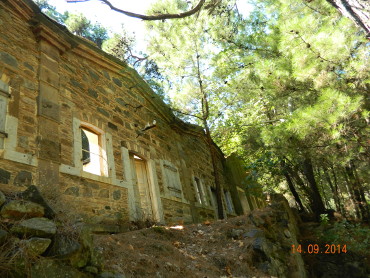 Several times in the past attempts were made to exploit the antimony reserves that were discovered in the area of Keramos, roughly at the point where the valley of Agiasmata begins.

Systematic extraction and processing began, however, at the end of the 19th century by a French company. Later, during the Decade of the 30’s, the mines were taken over by Bodossakis (a Greek industrialist). During this period, in the mines worked around 300 workers from the surrounding villages, mainly from Keramos. Unfortunately, many of these people suffered pneumoconiosis, due to the fact that no precautionary measures during work were taken, such as masks, etc. (see Michael Rymikis, Seeking the roots..., p. 150).

For several decades now the mines no longer work. Preserved are some buildings of the administration complex. There, at a prominent point on the side of the road to Agiasmata there is a board with the names of the deceased workers due to pneumoconiosis.

There are also several galleries preserved, which unfortunately are not accessible for the moment due to risk of collapse. There are thoughts to turn the mining area into an attraction to visitors.